a garden of literary delights 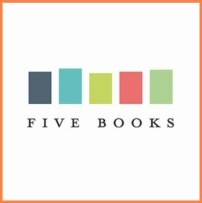 That’s what I discovered at the website Five Books: The Best Books on Everything. I can’t believe it took me this long to find it! But at least now I know I will never run out of ideas about what to read.

As the site says:
We ask experts to recommend the five best books in their subject and explain their selection in an interview. This site has an archive of more than one thousand interviews, or five thousand book recommendations. We publish at least two new interviews per week.

The 1,000+ interviews are organized into 18 categories, including philosophy, history, fiction, politics, science, psychology, environment, and music and drama. Under the subheading of literary nonfiction and biography, I found this interview with writer and journalist Peter Hessler, who recommended the best of narrative nonfiction. His selections were:

The only book in that list that I’ve read is Slouching Towards Bethlehem (along with Play It as It Lays and The Year of Magical Thinking, also by Didion). Last month I watched The Center Will Not Hold, the 2017 documentary that told some stories about her I could sync to a few of my own memories of those times. None of our stories are true stories, but some are better than others. And Joan Didion is a very good storyteller.

I plan to read Among Schoolchildren because I enjoyed House so much that I still have a copy of it after several major book purges. I’d like to read some of Kidder’s other books, too, especially Strength in What Remains.

If you’re interested in pretty much anything, you’ll probably enjoy this site—and you’re likely to find some new interests there, too. Besides, curiosity and learning new things—including new concepts—expands your mental model, keeps your brain young, and improves your emotional granularity!