Which do you choose? The question is asked by Clay Hammond, one of the characters in the movie The Words. In this story, itself a story-within-a-story-within-a-story, Hammond, played by Dennis Quaid, is the author of a novel about another author, Rory Jenson. Jenson, played by Bradley Cooper, is a struggling writer who, after a trip to Paris with his wife, accidentally comes across the find of his life: an unpublished manuscript, the quality of which far surpasses that of his own multiply rejected efforts.

At a low point in his attempt to get his writing career off the ground, Jenson decides to type the entire manuscript into his computer, just so he can feel the words and experience what it might have been like to write something that good. He has no ulterior motive in doing so. This might not seem believable to everyone in the audience, but writing out or typing passages from the works of great writers is an exercise often recommended to aspiring ones.

After some prodding from his wife, however, Jenson agrees to submit the book to a publisher who naturally falls in love with it. The book is published to great acclaim, and Jenson receives several prestigious awards. As time passes and he’s able to get one or two other novels published, Jenson begins to forget that he didn’t actually write that first book. That’s when the true author of the manuscript, referred to in Hammond’s book as “the old man,” shows up and tells Jensen his story, the story the novel is based on. The old man is played by a grizzled, down-and-out Jeremy Irons.

So Jenson faces a conundrum: what to do now? He wants to make things right, but will he?

There’s a lot to try to tie together here to make everything work and make sense—on the one hand—while sustaining an element of mystery on the other. But the screenwriters either didn’t have or didn’t take enough time to do a seamless job of it. [David Mitchell tackles a much more complex interweaving of multiple storylines in his 500+ page novel The Cloud Atlas. Can’t wait to see the movie version, which will be out later this year. ] As a result, The Words has a few gaps, some of which I was dimly aware of as I watched the movie; others opened up the day after. They weren’t enough to turn me against the movie, but the screenwriters could easily have fixed them. So why didn’t they?

The collective gaps were minor compared to my main problem with the movie, which is the casting of Jeremy Irons in the role of “the old man.” His acting was impeccable, but he wasn’t remotely believable as the aging version of his younger self, a role well-acted by Ben Barnes. Irons bothered me so much that I couldn’t suspend disbelief during any of his scenes. My movie-going companion had the same complaint, but it didn’t bother her to the extent it did me.

The women in The Words all necessarily played supporting roles. I thought the best of the three was Nora Arnezeder as Celia, the young Parisian wife. 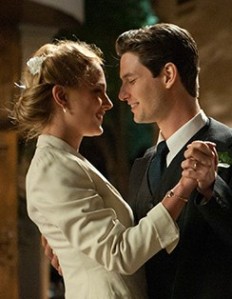 On the plus side, it was gratifying to see a writer portrayed so accurately onscreen. That doesn’t always happen in movies about writers or writing. While there are plenty of movies about writers, there are not as many about the process of writing a particular book. Some I’ve enjoyed are Finding Neverland, Capote, and Adaptation. My all-time favorite, though, is Stranger than Fiction, which is in my permanent collection. [Stranger boasts a righteously eclectic cast: Will Ferrell, Emma Thompson, Queen Latifah, Maggie Gyllenhal, and Dustin Hoffman. If you’ve been put off by the majority of Will Ferrell’s movies, give this one a chance. Watch it for the rest of the cast, but I’ll bet Ferrell will surprise you.]

Back to the question: life or fiction? The old man chose life. What did Jenson choose? And what did Clay Hammond choose?

I give it an A for effort and good intentions, an A- for acting, and a C+ for overall execution.

Have you seen it? What did you think? What are your favorite movies about writers and/or the writing life?

3 thoughts on “life or fiction?”