song of the trees

For the first 28 years of my life, I lived in Michigan, the Great Lakes State. We were inland from Saginaw Bay off of Lake Huron, so summers meant spending afternoons on the beach at Bay City State Park or driving up to Tawas City for the day. When I was a kid, our family spent a week or two every summer in a cabin on Higgins Lake, where there were daily motorboat rides on the Lake and weekends of waterskiing. Oh, yes, there was also a lot of swimming—but none of it by me. I never learned to swim and had a deep fear of the water for decades. I like to look at water, splash around in it a little, listen to the sounds of the surf or the waves, and even venture out on it in a boat once in a while, but that’s it. No swimming. 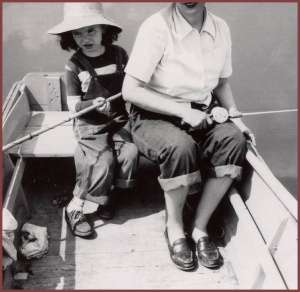 Not a happy camper. Can I get any farther away from the edge of this boat?

The first vacation my parents took me on was a fishing trip when I was about five years old. It meant leaving my baby brother behind and having my parents to myself. I loved every minute of it—except for the minutes when we were actually in a boat on the water, during which I reportedly whined or cried non-stop.

One day when I was a teenager, my mother, two brothers, and I were crossing on foot from the east side of town to the west side, which involved walking over a bridge. I refused to walk across the Third Street Bridge with them because I didn’t believe it was safe. Not only was it obviously decrepit, but you could look down between the wooden slats of the walkway and see the water! So I added a couple of miles to the jaunt by detouring solo to cross over the newer Memorial Street Bridge, which was constructed of concrete and steel. (Shortly after I moved to San Francisco, my mother sent me a clipping from the local newspaper with a picture of the collapsed Third Street Bridge.)

I lived in Northern California for close to three decades and spent a lot of time along the shores of the Pacific Ocean—especially the beaches at Pt. Reyes National Seashore, which is my favorite place in the world. I admit that if someone were to provide me with a cottage in Bear Valley and set me down in it, I would happily remain there for the rest of my life. Alas, that is unlikely to happen.

As it was, I moved to New Mexico, high desert with a rapidly dwindling body of water running through it that is still called The Rio Grande. Lots of other people have moved here from places adjacent to large bodies of water, and most of them sorely miss being near water. But I’m not one of them. I have realized that what all three places I’ve lived in have in common—and what seems more essential to me than water—are trees and lots of them.

Faded photograph: the view down the street from the last house I lived in in Michigan, October 1974.

I’m thinking about trees right now because it’s autumn and the first leaves are turning yellow and gold. And that reminds me of Michigan, where the leaves are turning much more spectacular colors of the autumn rainbow. I haven’t been back to see that in well over a decade and it’s the thing I miss most about my home state. I missed it even more when I lived in California, where deciduous trees are in short supply. But I’m satisfied with the golden oaks and aspens here because as long as there are deciduous trees, there will come the budding of new leaves in the spring.

And that is now my favorite tree-time of the year. I like the architecture of trees in spring when the pale shoots decorate their branches with lacy green filigree. I think you can see trees best in the spring. Sometimes I drive around in late March and April just to look at the trees. It almost makes winter worth it. Snow on branches is pretty cool, but only for the first 60 minutes.

song of the trees

Here is Song of the Trees written and recited by poet, actor, and activist John Trudell:

4 thoughts on “song of the trees”