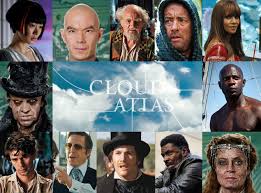 To do any kind of a comprehensive review of Cloud Atlas, I would have to have seen it more than once, which I haven’t. At least not yet. Other people all over the internet have tried their hands at interpreting and explaining it, dissecting it into bite-sized pieces to tease out all the hidden and not-so-hidden layers of meaning. The reviews range from the positively rhapsodic to the totally dismissive. As for me, I enjoyed the movie well enough that if I don’t get another chance to see it on the big screen, I’ll probably get the DVD. The extras are sure to be worth it.

Much of the detail of the book was still fresh in my mind when I saw the movie, so I was a bit preoccupied with comparing one to the other—and comparing my mental pictures with the directors’ pictures. Someone seeing the movie without having read the book would be spared those distractions. But they would not be spared the distraction of trying to figure out who was who (actor-wise), since each of the major players had roles in several different stories/time periods, sometimes made up and costumed to a fare-thee-well. I understand the intention behind this choice of casting, but it did interfere with my suspension of disbelief. I think I would find a second viewing more satisfying because it would be easier to focus on the storylines.

And the storylines are very good. All six stories are compelling, even more so in the movie. Part of the reason may be that so much material from the book had to be cut in order to make this three-hour movie. Editing is a boon to any kind of writing. Raymond Carver didn’t begin to gain notoriety until editor Gordon Lish slashed a collection of his stories to the bone. It’s an imperfect analogy, though, since the filmmakers did create a couple of scenes to either dramatize an element or to outright change an outcome .

I also thought interspersing the stories—which wasn’t really an option in the linear narrative of the book—worked much better to illustrate the themes of interconnectedness, oppression, and reincarnation. There was an awful lot going on, but it wasn’t difficult to keep track of.

As spectacle, the movie is a winner. The sets, costumes, writing, acting, and directing are all first rate. As mini-morality plays, each individual story is a winner, too. But the stories don’t add up to more than the sum of their parts, which the book and movie are both trying to convince us they do. Is it necessary that they do? I don’t think so.

The Wachowskis have directed a couple of movies I really enjoyed, 1996’s Bound and 1999’s The Matrix. But I haven’t quite forgiven them for V for Vendetta, which I thought was absurdly heavy handed and completely lacking in subtlety. Of course, it was adapted from a graphic novel, which was probably the right format for it. Cloud Atlas redeemed them, in my opinion. I hope the movie gains a following because it deserves to be appreciated for what it is, not for what it could be, should be, or has delusions of being.

Like Loading...
Posted in Movies and tagged Bound, Cloud Atlas, Film, Raymond Carver, The Matrix, The Wachowskis, V for Vendetta