sittin’ with the kitten

There’s no one here to take a picture of the two of us (Naima and me), but this is the chair in which I spend time each and every morning doing what I call sittin’ with the kitten. Naima isn’t really a kitten anymore at two years and nearly four months old, but she’s still quite kittenish and playful.

I can’t recall how we got into this habit. There’s another white wicker chair in the living room next to the tallest cat tree, and that’s where we first started doing this. At some point we switched to my bedroom, which has a large window facing a grassy area and a bird-filled tree.

I’m a creature of habit in the morning, and Naima has learned my habits well. She precedes me down the hall first to the bathroom and next to the closed door of my office. Then she waits while I get all my computer equipment turned on, open the blinds in the living and dining areas, and get the water heating for my coffee before I feed her. After she eats her breakfast, she plays with her toys while I finish fixing cereal or toasting an English Muffin.

I eat breakfast in front of the computer (nasty habit). When Naima’s done playing, she comes and sits just inside or just outside my office waiting for me. I’d say waiting “patiently,” but it’s hard to ascribe patience to a cat. After I finish eating, I take the rest of my coffee back to my bedroom.

Sometimes, Naima lags behind a little. If she’s not in the room when I sit down in the wicker chair, I say, “Where’s the kitty?” That’s her cue to peek around the corner and then come running over. She prefers to get up into my lap from the left side, so she might have to circle the chair before jumping up. Then she settles against my chest, with her head near my left shoulder, and we snuggle for a while.

This is usually the only white space in my day. If you don’t know the term, here’s a chunk of information from Wikipedia:

In page layout, illustration and sculpture, white space is often referred to as negative space. It is the portion of a page left unmarked: the space between graphics, margins, gutters, space between columns, space between lines of type or figures and objects drawn or depicted. The term arises from graphic design practice, where printing processes generally use white paper. White space should not be considered merely “blank” space — it is an important element of design which enables the objects in it to exist at all, the balance between positive (or non-white) and the use of negative spaces is key to aesthetic composition. When space is at a premium, such as some types of magazine, newspaper, and yellow pages advertising, white space is limited in order to get as much vital information on to the page as possible. A page crammed full of text or graphics with very little white space runs the risk of appearing busy, cluttered, and is typically difficult to read.

I worked in the Retail Advertising Department of a newspaper for several years, which is where I became familiar with the term. Then a year or so ago, a newspaper copy editor blogged about the idea of incorporating white space into one’s day—to serve the same purpose as white space in an ad. Cramming the day with activity after activity with no time to just be leads to a cluttered mind, he suggested. It’s hard to take a deep breath when we’re always focused on or engaged in something, always trying to complete a task, converse with someone, or solve a problem. I agree. There’s almost no white space in my day–except for the time I spend sittin’ with the kitten. 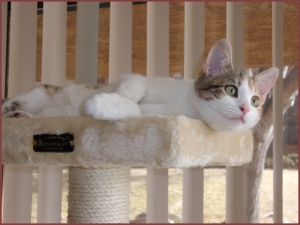 Naima atop her perch. Be Here Now.

After Naima has had enough cuddling, she moves over to the cat tree, gives herself a bath, and then arranges herself on one level or another to watch what’s going on outside. I finish my coffee. And look out the window. And talk to her a little (her tail swishes in response). I’ve thought of bringing a book in there to read once she gets off my lap. Or a notepad to jot down the list of things I need to do or whatever random ideas may occur to me. You know–do something useful. But no. Then it wouldn’t be white space, anymore.

If I’m preoccupied, Naima notices. She reminds me to be present with her. A couple of years ago, when I was tutoring kindergarten students in the Albuquerque Reads program, one of my students, Angel, was very bright but easily distracted. One day, I heard myself say to him, “Angel, be here now.” He interpreted that to mean “pay attention.” Whenever he noticed he wasn’t paying attention–maybe it was a look I was giving him–he’d say, “I know. Be here now.”

At the end of the tutoring year, I created a card for him using a photo of Naima looking very sternly and  intently into the camera. I added the caption Naima says: Angel, BE HERE NOW, which he got quite a kick out of. I wonder what his parents made of it.

The fact is I’ve gotten some of my best ideas sitting in that wicker chair in the morning without really trying to have them. So I don’t let anything intrude into this white space. It’s one of the most important parts of my day. I’m sure Naima would agree.

One thought on “sittin’ with the kitten”