you: a work of art in progress

If you thought of your life as a work of art in progress, what existing art form would it most resemble? The idea of living one’s life as a “work in progress” is not new, and I have come across it many times in my travels. More than a few years ago, when I was struck afresh by the rich possibilities of artistic metaphor, I took a look at my own life in this context and also surveyed some friends. My own answer to the question was immediate and obvious, but I was surprised by every single answer I received from my friends.

An ex-insurance industry executive said that his life would be a multi-media performance piece. A writer described her life as a sculpture, while a musician called his life a “junk” sculpture. A computer  programmer was clear that his life was a symphony. Several years later, I posed the question to several different people and got a whole new set of answers, including: 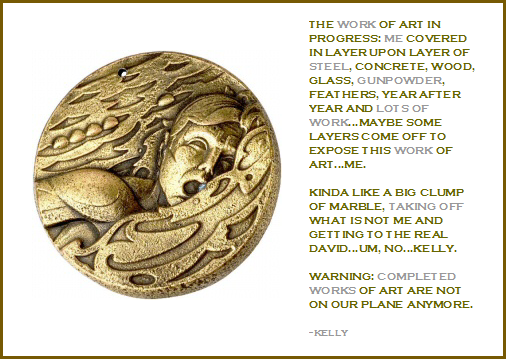 At that time, I saw my own life as a play and this is what I wrote about it:

The things in my life are all stage props; I’m very aware of setting my scenes. All the people in my life are characters in my play and so, of course, am I. I just happen to be writing, directing, and starring in this production which, a friend remarked, would probably be the most expensive play ever produced.

There’s an inherent discipline in living one’s life as a play in progress. This is different from the discipline that’s part of living life as a sculpture or as a painting or as a symphony. In a play, props and scenery are vital–but only to the scenes in which they belong. One can’t become too attached to any particular props. Staging is also important and so are timing and pacing.

I recall being conscious of things as background props and of people (including myself) as characters from an early age. I wrote plays, read plays, directed amateur productions, and hung out with the local drama group. I thought up names and descriptions of characters, along with elaborate decorating schemes, to amuse myself. When I was old enough to notice I decided this was an odd way to think about things. Whereas other people seemed to make choices almost by instinct, I could consider a range of alternatives: the final choice depended on the requirements of the scene or the plot line; choosing otherwise seemed  arbitrary.

That felt like a strange approach, but strange or not, it was my approach. When it came time for me to reinvent myself at a major twist in the plot, I had no difficulty changing my wardrobe, my style, my attitude, and even my name. After all, this isn’t real life–whatever that’s supposed to be.

I wouldn’t use the same metaphor to describe my life now. Some days it feels like a surrealistic jigsaw puzzle: challenging, colorful, so much to look at, still not put together, and not at all what you’d (or I’d) expect.

What about you? If your life were a work of art in progress, what metaphor would you choose to describe it? Would it be a painting, a sculpture, a black and white photograph? A novel, a short story, a play, a poem, an essay? Would it be a symphony, an opera, a collage, a Rodgers and Hart musical, a movie? Or…what?

2 thoughts on “you: a work of art in progress”