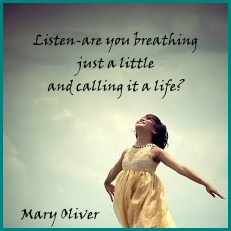 this is how a human being can change:

Suddenly, he wakes up,
call it grace, whatever, something
wakes him, and he’s no longer
a worm.

He’s the entire vineyard,
and the orchard too, the fruit, the trunks,
a growing wisdom and joy
that doesn’t need
to devour.

Shake off this sadness, and recover your spirit;
Sluggish you will never see the wheel of fate
That brushes your heel as it turns going by.
The man who wants to live is the man in whom life is abundant.

Now you are only giving food to that final pain
Which is slowly winding you in the nets of death,
But to live is to work, and the only thing which lasts
Is the work; start there, turn to the work.

Throw yourself like seed as you walk, and into your own field,
Don’t turn your face for that would be to turn it to death,
And do not let the past weigh down your motion.

Leave what’s alive in the furrow, what’s dead in yourself,
For life does not move in the same way as a group of clouds;
From your work you will be able one day to gather yourself.

if up’s a word; and a world grows greener
minute by second and most by more–
if death is the loser and life is the winner
(and beggars are rich but misers are poor)
–let’s touch the sky:
with a to and a fro
(and a here there where)and away we go.

it’s brains without hearts have set saint against sinner;
put again over gladness and joy under care–
let’s do as an earth which can never do wrong does
(minute by second and most by more)
–let’s touch the sky:
with a strange(and a true)
and a climbing fall into far near blue

if beggars are rich(and a robin will sing his
robin a song)but misers are poor–
let’s love until noone could quite be(and young is
the year,dear)as living as i’m and as you’re
–let’s touch the sky:
with a you and a me
and an every(who’s any who’s some)one who’s we

This post is part of April’s 30 Days of Celebration. To read more, click on the Celebration category link.