Archive for the tag “National Preserve”

I have fond memories of visiting the park around Battleship Rock (aptly named as you can see from the photos below) 10 years ago with a group of friends around dusk. The moon over the Rock was a wondrous sight. But seeing the Rock in daylight was no less grand.

We strolled around for a while, and I took a few more photos. Below is the Jemez River and a tangle of autumn leaves and blue sky.

Then we headed up to Valles Caldera, which is an 89,000-acre National Preserve. A caldera is a volcanic crater formed by the collapse of the central part of a volcano. This area was a privately owned ranch until the year 2000 and has only been a National Preserve for 12 years!

Fun fact: Some scenes from the new movie, The Lone Ranger, starring Johnny Depp, were filmed here. In fact at least two dozen different movies and TV series have been filmed at this location.

Although I checked my camera’s battery before I left home, it gave out before I was able to photograph the caldera itself, thus giving me a really good reason to return to this amazing and unusual place. We went on a 45-minute van tour that stopped at the edge of a forest of Ponderosa Pines, and so my last few shots were of–you guessed it–trees. 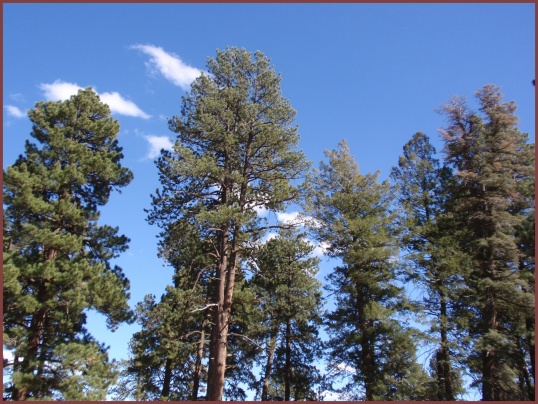 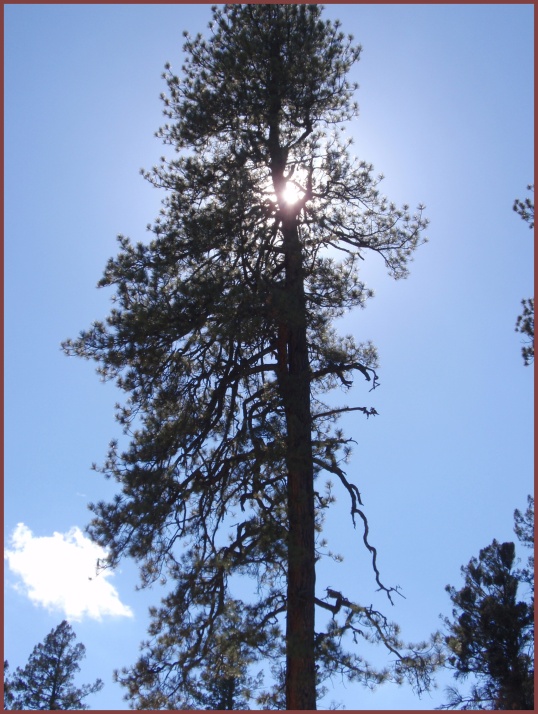 I do like trees. My greatest disappointment is that I wasn’t able to take any pictures on the drive back. The sunlight striking the fields of golden leaves was truly breathtaking. But now I know where to go next October to get my fix of autumn leaves.